Students Get Up Close to Sea Turtles 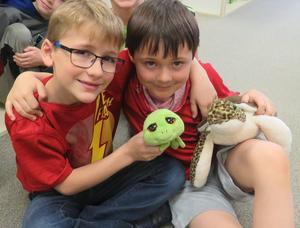 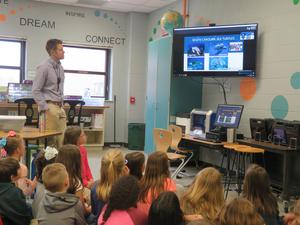 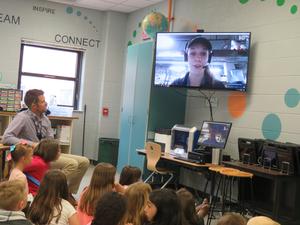 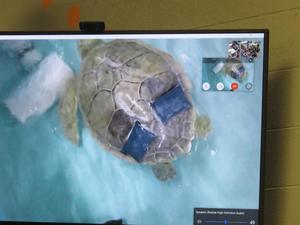 Fawkes suffered a devastating injury leading to a debilitating condition called "Bubble Butt Syndrome." It might sound funny, but it can be deadly for a young sea turtle like Fawkes - named by the South Caroline Aquarium Sea Turtle Hospital employees after a character in the Harry Potter series. Lee Elementary second-graders could see the weights placed on the back end of Fawkes' shell during a Skype session with the aquarium. The weights, they learned, help the turtle dive to get the food he needs.

"There is a big crack on the back of the shell you can see has healed, but it has left the turtle with the syndrome where he can't dive deep enough to reach the food. We call it Bubble Butt Syndrome," explained Susan Snide, a distance learning interpreter for the aquarium via a Skype session with Mr. Fischer's class. She told students that if left untreated, the syndrome can be deadly to a turtle in the wild because it can't reach food and it would be an easy target for predators.

The second-graders were completely attentive as they learned more about the sea turtles and how the hospital helps them. Through Skype, they were not only able to see the turtles up close but also ask questions directly to Snide. This was the second time this year the second-graders "visited" the aquarium without ever leaving Michigan. Their first visit taught them about sea otters. During that visit, they learned about the sea turtle hospital and couldn't resist the opportunity to visit again.

Snide showed students how the turtles are cared for in separate large pools. She said of the seven species of sea turtles, four live in the South Carolina area - the Leatherback, Green, Loggerhead and Kemp's Ridley.

Fawkes, she explained, was most likely injured by a boat propeller that cut his shell.

Another turtle called J.K. Rowling has debilitative turtle syndrome. Doctors aren't really sure why the turtle is sick  - but they knew something was wrong with the 225-pound loggerhead turtle. Their best guess is that the turtle may have eaten something he shouldn't have eaten  - like plastics or latex or other garbage dumped in the sea. They were keeping him to make sure he got plenty of good food for awhile before hopefully being able to return him to the sea.

On a happier note, Dumbledore, students learned,  would be released back into the wild soon. The juvenile turtle suffered cold-stunned. The waters the turtle was in became too cold too quickly. The young turtle is one of 274 sea turtles the hospital has been able to release back into the wild.

Students learned how the hospital helps the turtles so they can hopefully be sent back to their natural habitat. Some whose injuries are too severe may find homes in zoos or other protected areas.

The students also learned about ways they can help sea turtles - even from as far away as Michigan. Snide told them the story of Mufasa - named because of the long green algae growing on his shell. Mufasa wasn't eating and was very sick when he was brought to the hospital. A scan found the turtle at some time ate a latex balloon that was now blocking his intestines.

"To a turtle, that piece of floating latex or plastic looks a lot like a jellyfish," said Snide. "He probably thought it was food. They can't tell the difference between food and plastic."

She told students even though they don't live near the ocean, they can help the sea turtles by reducing the amount of plastic they use daily that could find its way to the ocean eventually.  "You are also already doing a great thing just by joining us here and learning about the sea turtles," she said.

Snide told students some fun facts about sea turtles - how they can live to be 80 to 100 years old or maybe even longer. She told them each section of their shell is called a "scoot" and  how the hospital tags sea turtles to study them. She told them a juvenile sea turtle is called a hatchling, a turtle of about 15 years old is a sub-adult and sea turtles aren't considered adults until they reach 30 years old. She also said it's not until turtles are adults that they can be identified as being either male or female.  Only the adult female turtles ever come on shore.

Fischer said his students are very interested in learning about different animals. He said they will take what they've learned from the Skype session and write about sea turtles, do some comparisons of the different kinds of sea turtles, and possibly add in some classroom art projects as well.  He said the class is also interested in "adopting" a sea turtle as a way of helping the aquarium's work to protect and save injured and sick turtles.