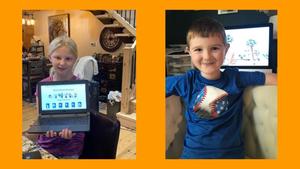 Milo Burghardt and Sydney Engel are learning virtually at home this school semester, but it doesn’t mean they aren’t connecting with others. Recently they joined a national virtual discussion with a published author and illustrator and were selected from students across the nation to ask the questions on the live event.

Both Milo and Sydney are second graders in TK Virtual School. They submitted questions to Scholastic Books along with hundreds of other students across the country. They were both selected to join in the virtual visit with author Tami Charles and illustrator Bryan Collier who created the book “All Because You Matter.”

Milo asked illustrator Collier, “How do you make the pictures?”

Collier explained his process involves pencil drawings and watercolor paints and then a collage effect where it puts all the pieces together. He said his inspiration comes from his grandmother who quilted and he sees his collage pictures as a kind of quilt.

Milo said he has seen Collier’s illustrations in other books and thinks they are always outstanding. “I thought it was really cool that he draws his outlines and then paints inside them. It was awesome to hear Mr. Collier talk right to me and tell me that I can do it,” said Milo.

Milo said he’s encouraged to try a collage.  He likes drawing comics and said he might try a collage to make a comic.

Sydney posed her question to author Tami Charles, asking her, “Tell how a story ends before it begins.”

She said knowing the ending before writing begins isn’t always how it works. Sometimes, after editing and revising her work, she said it all changes before the book is finished.

Sydney said being able to ask the author a question directly has inspired her to write. “I was very nervous and excited at the same time.  I was having a hard time writing the end of my story that day and didn’t know what to write when I thought of the question. Writing is very hard for me so I wanted to know if authors have a hard time too.  Talking about it makes me want to write now,” she said.

Milo said he was excited about being able to ask his question and he liked the book. “I like how it says that kids are important,” he said. “I learned a lot because all the kids’ questions were really good and I liked hearing their answers.”

The conversation with the author and illustrator and all of the student questions can be watched on Facebook.