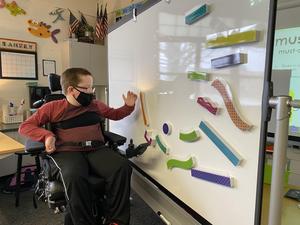 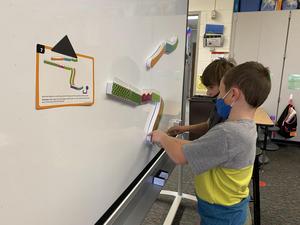 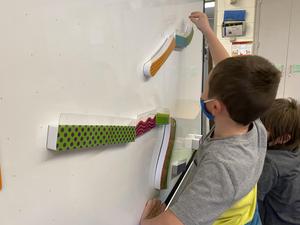 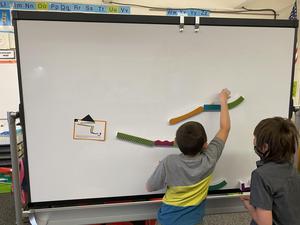 Students who have to stay inside for recess for various reasons don’t always have a lot of options for things to do. But with the help of a grant through the Barry Community Foundation’s Wilson H. Craig fund, Lee Elementary second-grade teacher Nathan Fischer is adding an exciting and challenging option.

Fischer received $641 to help purchase a large, two-sided, mobile whiteboard. The board can be transported in and out of classrooms for students. Along with the magnetic board, Fischer purchased several items to use with the board to create marble runs. Students can change, rearrange, and expand the runs over and over again. They build, race and learn  - all while playing.


“They have been a huge hit. Students collaborate, design, and problem solve as they build different runs,” said Fischer who says the board really offers STEM lessons in engineering, math and art while students play.


Students say they aren’t always successful on their first try, but that’s what makes it exciting.

“It’s really  cool. We made a super cool track the other day, but it took us about 50 million tries before we got it to work right,” said second-grader Ian Hall-Humphrey.


Classmate Nate Boursma said it’s fun to build different marble runs all the time. “I love it all,” he said.


Second-grader Myah Rosales said it’s important not to give up. “You just have to keep trying and changing things where you need to and make it work. I like seeing how big we can make the run.”


Fischer said he sees students having a lot of fun with the marble track, but also sees them problem-solving, working out engineering issues, and being creative. He said students also use Magna-Tiles to create three-dimensional shapes attached to the whiteboard.


“The whiteboard has provided hours of enjoyment and learning for students while they play during inside recess,” said  Fischer. “I like seeing them work together to plan out and build the tracks and then work together to fix things that don’t work the first time. It gives them encouragement to keep trying.”