Lee Greeters Celebrate Every Week of Students in School 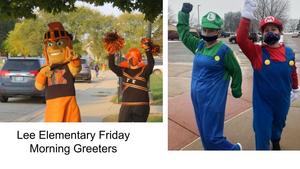 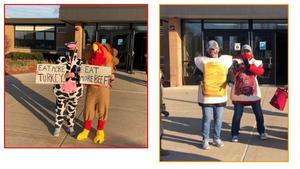 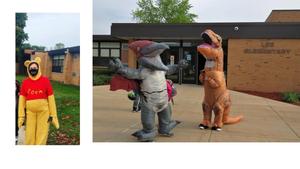 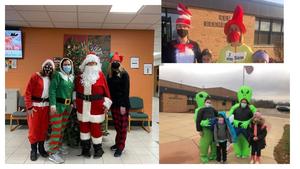 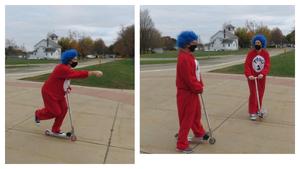 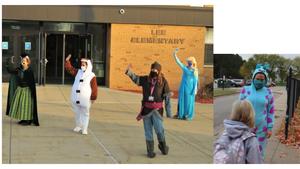 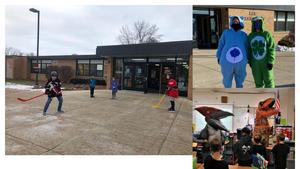 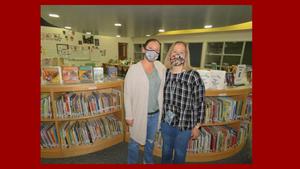 Two dancing dinosaurs greeted Lee Elementary students one Friday morning. Another Friday, “Thing One and Thing Two” from “The Cat in the Hat” whizzed along on scooters as they waited for students to arrive. Yet another Friday brought four main characters from “Frozen” to welcome students to the last day of the week.

There is always something or someone new welcoming Lee second and third graders every Friday thanks to the efforts of two Lee staff members – behavioral interventionist Amber Smith and Lee Librarian Becky Branch.

“While we kept hearing of so many other schools going to all virtual school or being forced to close because of COVID, we wanted to celebrate being able to stay open and having our students here. So we started doing this Friday morning greeting to celebrate making it another week,” said Smith.

The Friday fun stared in October with the two dressed as the school mascot, Tommy Trojan, and a TK cheerleader as part of homecoming celebrations. They had so much fun, they decided to do something again the next week.

“We thought we would just do it every Friday in October, then we decided why not go until Thanksgiving and then it became Christmas and now we’re going for the end of the year and we only have  two Fridays left,” said Branch.

When school started in the fall, no one knew for sure how long the schools would be allowed to stay open and students attending in person.  Throughout the year, all three TK Elementary schools have stayed open all year with the exception of a two-week period around the holidays when the entire district moved to remote learning as precautionary measure.

Although initially Smith’s idea, it didn’t take much for her to persuade Branch to join in the weekly fun. They keep their plans secret and encourage students to try and guess what they’ll be next.  They’ve dressed as aliens, Care Bears, Super Mario and Luigi, the Easter Bunny and an egg, a giraffe and panda, Winnie the Pooh and characters from Monsters Inc., and even a peanut butter and jelly sandwich.

Branch said she has had a blast. “I love doing this. I feel like a kid again on Halloween. The kids can’t wait to see what we are going to be on Friday and now they try to guess.”

The costumes come from their own collections, costumes borrowed or donated from community members, and even homemade costumes - like the boxes of Valentine heart candies, or the Easter egg to go along with the Easter Bunny.

The pair has enlisted the help of other staff members and even principal Angie Jefferson to bring out four main characters from Disney’s “Frozen.”  The “Cat in the Hat” celebration included not only the “Cat in the Hat,” but also “Thing one and Thing Two,” and the goldfish too!

Smith said the reaction varies among students and depending on the costumes. “A few kids don’t love the costumes and might avoid us on the way in, and that’s OK. We just give them their space,” said Branch. “Most of the kids come up right away and are just all smiles and so excited to see us.”

Now that the year is almost over, Smith said she’s glad the Friday greetings have continued all year. “We just wanted it to be a year for the kids to remember. There’s so much that’s changed for them – wearing masks and the quarantines and not interacting with the other classes and seeing some of their friends. We really just want to celebrate every week that we’re here in person together. It’s a great way to start the day and be thankful we made it one more week."