Author's Story Reminds Young Readers It's OK to be Yourself 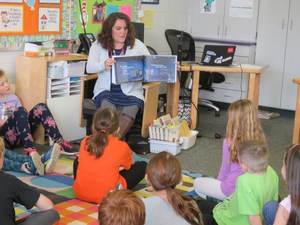 It's OK to be just who you are - even if being yourself means you feel like you are a little different than everyone else. That's the message third graders received loud and clear from new children's author Katie Newell.

Newell visited Krissta Hannapel's students as well as Marc Lester's classroom where she read her recently published book "I'd Rather be a Dragon."

The children's book is the story of an imaginative girl who doesn't feel like she fits in with some of her friends who like to dress up as princesses and have tea parties.  Instead, Newell's character likes to create alien costumes, play dragons and dinosaurs and imagine the world of time travel.

The story allows the girl to realize she's not good at some things - like playing princess, dancing or remembering things. But she realizes she is good at doing other things - like being imaginative and creative.

Newell told students the book was inspired by actions of her own three children.  "My third-grade daughter is a dragon-loving, dinosaur girl," she said. "My kids pretend to be dragons all the time."

Newell, who lives in Lowell and is a graphic designer, said the book shows children it's OK to be who you are. "It's really about marching to your own imagination and not really caring what other people think you should do," said Newell.

Lee students were able to ask Newell lots of questions about how she came up with her ideas to how she actually wrote the book.

"It's easiest to write about what you know," said Newell. "I wrote about experiences with my three children."

She told students she started writing when she was in the second or third grade and always dreamed of one day writing her own book. She said the process of writing and illustrating the book herself, then getting it published took almost a year.

"Don't give up. It takes a long time sometimes to get what you want," she said.

She said her manuscript was sent to several publishers, but it was repeatedly rejected. That's when Newell decided to take matters into her own hands and self-publish her book. With the help of a KickStarter website campaign to raise funds, some grit and determination, she was able to get funds to self-publish her book and today has already sold more than 1,000 copies.

The book can be ordered online at Fieldstonepress.com