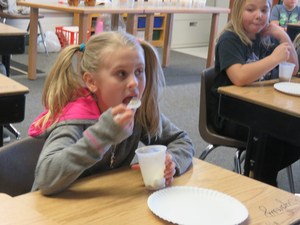 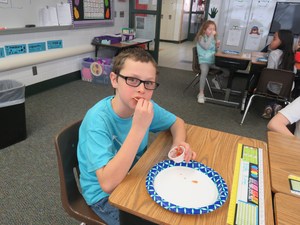 Who doesn't like chips and salsa, ice cream, cereal, honey and spearmint gum? But who knew so many of these foods in different brands are made right here in Michigan?

For the most part, students didn't realize Little Caesar's Pizza originated in Michigan or that Vernor's Ginger Ale -  the oldest soft drink in the country - originated in Detroit. They know of course that Michigan is home to many homegrown fruits like blueberries and cherries, but many didn't realize the extent of the honey production in the state or the state's ranking in spearmint and peppermint production.

As part of the third-grade social studies curriculum, students learn about the state’s history, government, geography, resources and economy. Taste of Michigan gives them a small "taste" of many of Michigan's top food products.

“I remember eating these potato chips when I was a kid, but we could only get them in Detroit,” said teacher Brian Hammer of Better Made Potato Chips.  “When we moved over here, when I went back to Detroit we would take boxes and buy bags of these chips to take home with us.”

Students rotated from room-to-room with each teacher featuring a different Michigan-made treat.

The Kellogg brothers, John and Will, left some cooked wheat to sit while they attended to other issues. When they came back they found the wheat had gone stale. They were on a tight budget so they forced the wheat through rollers and surprisingly discovered the tasty flakes.

One of the favorite tasting room was where ice cream floats were being served using Hudsonville ice cream and Vernor's original Ginger Ale.

James Vernor, a Detroit pharmacist, was called to duty in the Civil War. Vernor’s Ginger Ale is one of the nation's oldest soft drinks first severed in 1866.

Vernor was working on a medicinal tonic of vanilla, spices and ginger to calm the stomach when he was called to fight in the Civil War. He left the blend in an oak cask while he went to fight. When he returned four years later, the barrel’s content had become a zesty, sweet, gingery flavor that became Vernor's Ginger Ale.